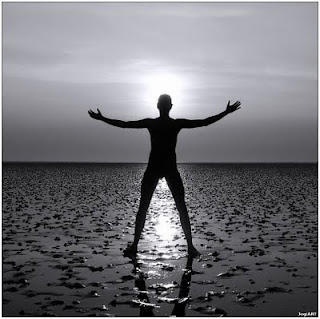 Rain (noun) water that has fallen as rain, rain water, a heavy fall, descent of this water.(Verb) to send down rain, to fall as drops of water from clouds, to give or administer abundantly etc..

The name “Rain” means abundant blessings from Above. It can be used for male or female. So Rain Man is referring to a male.
So we can arrive that Rain Man have several meanings 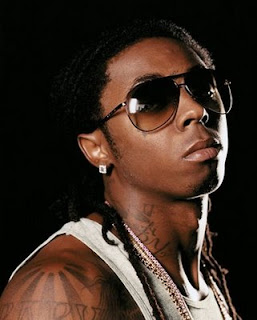 Lyrics: “Yeah I’m in this business of terror got a handful of stacks betta grab an umbrella…I make it rain, I make it rain on them H***”

“Young Wayne on them H*** A.K.A make it rain on them H***”
“Every body say Mr. Rain Man can we have a rainy day? Bring a umbrella, please bring an umbrella…” 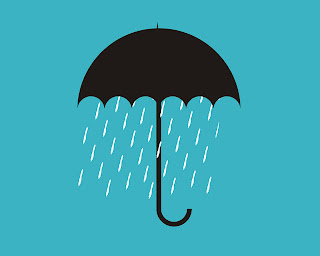 Umbrella defined
1. Collapsible canopy that protects from the rain or sun
2. Object like an umbrella
3. Something that gives support, protection, or authority

The name Umbra appears in the Necronomicon which is a “Fictional” occult book of demonology by H.P. Love Craft.

In the book umbra is one of the thirteen globes of Yog Sothoth a celestial body.
“Twelfth is UMBRA, He appeared like a giant: he can convey money from place to place if though bid him and bestow the love of any woman that though desireth.”
Basically UMBRA is a devil

(sorry for bringing her up but she will appear in most blogs until she gets help)
In "Umbrella" Jay sings “rain man” is back with little miss sunshine Rihanna where you at?”

Notice “rain man” and Jay are two separate people in that lyric. It says “jay, Rain Man is back with little miss sunshine…” The entity introduced its self as rain man and Rihanna respond saying...
”you had my heart and we will never be world apart…your part of my Entity here for Infinity…”

This song is not about love for a man but a spirit (fallen spirit name Rain Man). Rihanna herself stated on the set of the umbrella video that this song “has a deeper meaning to it, you have to really listen to it” It is possible that Rain Man is a devil?
well he showed up in her video didn't he? here he is if you didn't catch him...
rain man 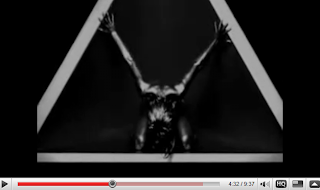 Baphomet in a pyramid (all seeing eye pyramid) her arms are the outstretched horns, head digitally altered to form the snout. Shoulders eye sockets. Legs the jaw structure.

Devil makes promises if you worship him (as you would worship a God)
Book of Mathew: 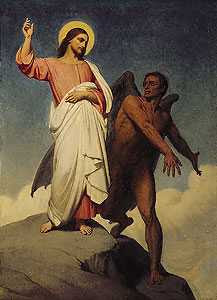 {8} Again, the devil took him to a very high mountain and showed him all the kingdoms of the world and their splendor. {9} "All this I will give you," he said, "if you will bow down and worship me." Mathew 4

Rain man is a god (devil) who offers abundant blessings from above like, money, fame and women. But with a heavy price. You are in bondage… Notice how miserable these artists look and seem? they are not truly happy.
Some portray this in their lyrics. for example

Lil Wayne, Eminem and Joe Budden
Song; The bad, the sad and the hated (you can look the lyrics of this song up for yourselves, it is pretty depressing). 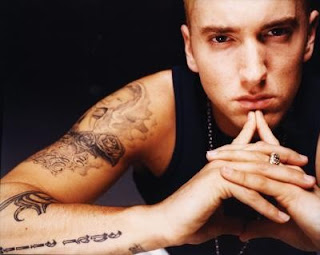 Makes it no secret who’s on his side and how he got where he is.So I didn't have to dig too deep on his issues.

“my name isn’t going to be slim shady no more, no more Eminem either, I don’t even go by my government name Marshal Mathers…if I do come back you know what my new name gon be? “Rain Man”

Rain Man song lyric;
“I aint got no legs or no brain, nice to meet you…I forgot my name, My name is not to become what I became at this level of fame, my soul is possessed by this devil…my new name is Rain Man”In another live performance he declares in his lyrics “Captain of a cult with an Elite Following” and he mentions the Anti-Christ.
Eminem more in depth of his possession of this entity Rain Man…in “My Darling” where he is conversing with the devil.

“This is what you wanted your whole life right boo?
Look at this house, look at these cars, Im soo nice ooohh!
Oh but you didn’t know that fame has a price too?
That your just seeing the downside too?
Loose your best friend from highschool, your wife too
Aint even sure your kid like you…”

Chorus…
"If I cannot have you then no one can
You’re my darling, cuz I possess your soul
Your heart, your mind and your body."

And his songs continues on about being possessed. In another song 3am (which is the demonic witching hour) and so forth. In the album” Relapsed” Eminem makes numerous mentioning of this “Rain man” entity. 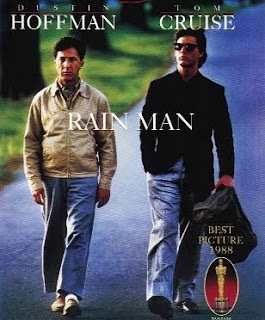 Woman: “you’re using Raymond, like you use every body.”
Charlie: “I’m using Raymond…Raymond am I using you?”
Raymond: “Yeah”
In one scene Raymond goes through a “transformation” where he is made over to look less savant by his brother.Raymond is suited up to match is Brother Charlie.


In Eminem’s Video “We Made You” 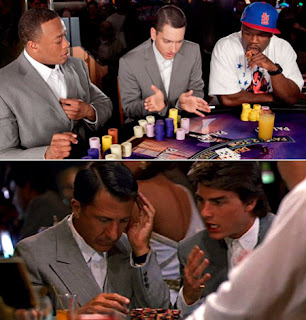 Eminem plays Raymond and Dre plays Charlie. Do you see the connection here? Eminem is Used as Dre’s tool for gains, at the cost of Eminem’s soul (which is possessed).

Back to Jay Z 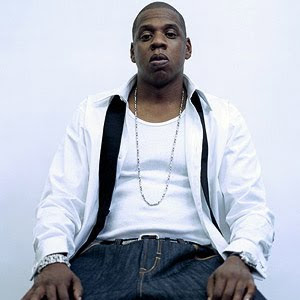 article stated; …”though his rhymes are constructed in advance, he never actually writes a word down on paper.”

He refers to his gift as his “Rain Man Flow” named after Dustin Hoffman’s number rattling idiot savant in the 1988 film.

Jay z stated; “ that he use to write down words before he got into the “Rain Man” theme…he then made a connection to how the character in that movie (Rain Man) just started mumbling numbers to describe the process that takes place when he comes up with his own lyrics.


Jay z in the studio awhile back stated…

“I look at music like a puzzle, like I try to figure out what Imma say on there, figure out the emotion on the track what its saying…then I go through my RAIN MAN.I cant explain it to yall It just comes out the air for me you start mumbling…”

Idiot Savant-
Remember; “I aint got no legs...or NO BRAIN nice to meet you, Hi my name is… I forgot my name (indicating idiot savant in rain man movie) my name was not to become what I became with this level of fame, My soul is possessed by this devil…my new name is RAIN MAN.
lyrics to Eminem's "Rain Man."

So this Rain Man entity is it a demonic possession that takes over these artists to manipulate and brainwash listeners? 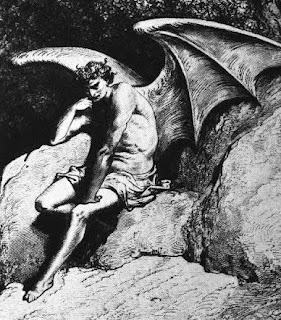 Remember Lucifer was created to make music in heaven. When he was cast out of heaven for wanting to be like God. Here today he makes himself known through the very thing he does best…music. And his name is “Rain Man”
to some.

Only difference between Eminem and Jay is that one tells you straight out who is running things. The other seems to be in denial or use hidden messages and masquerade about flashing signs when he too is being used by a demonic entity.

If you have suggestions on topics to cover

New comments are not allowed.